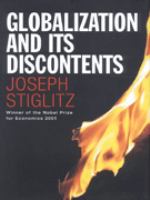 In this contraversial book, the author and winner of the Nobel Prize for Economics argues that though globalization should be a powerful force for good, it has been badly mishandled by the West (espeically in its lead institutions, the World Bank and the IMF) and that the anti-globalizing protestors have much to say that we should listen to. Coming from a figure of Stiglitz's background and authority, this is an explosive message which may change the way we regard current global politics.

Joseph Stiglitz is professor of economics at Columbia University.