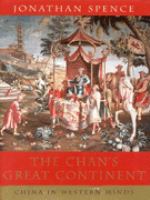 An exploration of the intricacies of western attitudes as they develop over centuries of trade which covers the period of Marco Polo's visits to China up until China's place in the modern imagination.

The enigma that is China has exercised a powerful attraction on Western minds for centuries. Travelers, sojourners, and those who have visited the country only in their imagination have offered us a kaleidoscope of Chinese exoticism, utopias and dystopias, realities and phantasms. Only Spence, the Yale historian and master storyteller (e.g., The Search for Modern China, LJ 4/15/90), could have woven such a brilliant tapestry from the threads of these Western travelogs, novels, stories, and plays. His cast of characters ranges from Marco Polo and 16th-century Portuguese explorers through Voltaire, Oliver Goldsmith, and Montesquieu to Mark Twain, Bertold Brecht, and Richard Nixon. Spence refers to these variegated accounts of China by the nautical term "sightings," which suggests something of the complexity of the relationship between observers and observed. This graceful book reminds us of the need to reflect upon our understanding of so protean a history and culture as China's. For all libraries. [Previewed in Prepub Alert, LJ 5/15/98.]Steven I. Levine, Boulder Run Research, Hillsborough, NC (c) Copyright 2010. Library Journals LLC, a wholly owned subsidiary of Media Source, Inc. No redistribution permitted.

Chinese historian par excellence Spence (The Search for Modern China) has taken on the formidable task of exploring how Westerners have thought about China. He starts not with Marco Polo, but with the Franciscan friar William of Rubruck, who came into contact with the Chinese inhabitants of the Mongol capital of Karakorum in 1253, some 20 years before the better-known Venetian's travels purportedly started, and ends with the recollections of Richard Nixon and Henry Kissinger. Included in the discussion are not only firsthand accounts by Jesuit missionaries, early diplomatic emissaries and, later, observers of the Communist revolution, but also works of fiction by those who had been to China (Pearl Buck, Victor Selagen) and those who had not (Daniel Defoe, Oliver Goldsmith, Mark Twain, Bret Harte, Franz Kafka, Jorge Luis Borges). The overriding theme is that most Western thought on China has been colored by the religious, political, economic or personal agendas of those doing the observing, or as Italian novelist Italo Calvino says in Invisible Cities, his novel about Polo and Kublai Khan, "the listener retains only the words he is expecting.... It is not the voice that commands the story, it is the ear." As in any such broad survey, the discussions of individual figures and the passages from original texts included are far too brief; however, in this case, they merely stimulate the reader's appetite to explore them further. Spence's book will appeal not only to those interested in history and literature, but to anyone looking for a perspective on contemporary discourse about China. (Sept.) (c) Copyright PWxyz, LLC. All rights reserved

Spence has long been one of the most prolific and elegant interpreters of Sino-Western cultural relations. Although most of his work has explored the Chinese perspectives of these encounters, this study returns to some of the themes first outlined in To Change China: Western Advisers in China, 1620-1960 (CH, Sep'69) and The Memory Palace of Matteo Ricci (CH, Jul'85). Based on Spence's DeVane lectures at Yale during the spring of 1996, the book surveys a vast sweep of Western literary views of China from The Travels of Marco Polo to Italo Calvino's Invisible Cities (CH, Apr'75). Along the way he deftly teases out the complex interplay of "otherness" unfolding--and frequently folding back on itself--through the centuries. For merchants, missionaries, social critics, political theorists, novelists, journalists, diplomats, diarists, and playwrights China has been alternately--and sometimes simultaneously---represented as a fairyland of wealth and enlightenment, an oppressively totalitarian dystopia, a "sleeping dragon," a living fossil, a "Yellow Peril," a socialist utopia, and an exemplar of practically every human condition in between. In wrestling with all of these, Spence has produced a comprehensive, entertaining, and highly useful volume for students and experts alike. C. A. Desnoyers; LaSalle University

A veteran China watcher (officially Sterling Professor of History at Yale), Spence offers a unique perspective on the Celestial Empire, basing his book on material he presented as a series of Yale lectures (which were "expected to be scholarly enough to meet some basic academic requirements, but accessible to anyone"). Spence follows the ways that China has been "refracted over time in Western minds." He posits that China fascinates people today as it has fascinated Westerners since we laid eyes on that mysterious land. In analyzing Western reactions to China from the thirteenth century to the present, reactions ranging from imaginative to stereotypical to informed, Spence pores over diplomatic reports, correspondence, travelogues, novels, drama, poetry, and film. Marco Polo's Travels comes under scrutiny first, as the earliest work "by a Westerner to claim to look at China from the inside." The degree of diplomatic and commercial contact increased from that point on, and the reader witnesses the influence of things Chinese even on Western decorative style. By the mid^-nineteenth century, an influx of Chinese into the U.S. caused a whole new set of reactions to the concept of China and the Chinese. In more recent times, Henry Kissinger, Nixon's secretary of state, had great admiration for Chairman Mao, despite the Chinese leader's living a life as "withdrawn and mysterious . . . as the emperors he disdained." An edifying and engrossing book that discriminating readers will flock to. --Brad Hooper

A brilliant account of seven centuries of the Western fascination with China, told by one of America's greatest, and most prolific, historians of China. Spence (Yale; The Memory Palace of Matteo Ricci, 1994; The Search for Modern China, 1990; etc.) is a confident and experienced enough historian to admit what he doesnt know; here he doesnt know why China has had and retains such a hold on the Western imagination. Nonetheless, the fascination is there: from Marco Polo's 13th-century account of the court of Kublai Khan to Nixons and Kissinger's musings on the mystery and greatness of Mao, from the 19th-century French passion for all things Chinese to the fiction of Kafka, Borges, and Calvino. Spence is also a subtle enough historian to not attempt to bring some overall grand meaning to his narrative. Rather, he presents what he terms ``sightings,'' to imply the fleeting, often woefully inaccurate depictions of China that have been delivered in the West. Such sightings have allowed us to get our bearings, or seemingly so. Whether China has been praised as enlightened and progressive or reviled as cruel and despotic (and both have dominated Western thinking on China, often simultaneously), the purpose has been, inevitably perhaps, to examine ourselves, the West. And so, to mix an aural metaphor with the visual, understanding the China of the West requires, for Spence, understanding ``the ear that hears both what it wants and what it is expecting.'' Spence's prodigious and eclectic scholarship is on full display here, ranging freely over seven centuries of the sightings of adventurers, novelists, politicians. Some of his sources are well known (Karl Marx, Max Weber, Mark Twain), some are more obscure (the French novelist Pierre Loti, American writer Eliza Jane Gilbert); yet within Spence's skilled writing they all intrigue. Seldom does scholarship this detailed grab the reader so. This has always been Spence's genius. A wonderful book. (Author tour)

Jonathan D. Spence was born in Surrey, England on August 11, 1936. He received a B.A. in history from Clare College, Cambridge University and a M.A. and Ph.D. from Yale University. He was Sterling Professor of History at Yale University from 1993 to 2008. As a historian specializing in Chinese history, he wrote several books including The Search for Modern China, The Death of Woman Wang, and The Memory Palace of Matteo Ricci. The Gate of Heavenly Peace won the Los Angeles Times Book Award and the Henry D. Vursell Memorial Award of the American Academy-Institute of Arts and Letters.