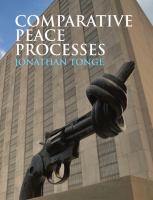 The term Âpeace processÂ is now widely used to describe attempts to manage and resolve conflict. As the nature of conflict has changed, so the range of available tools for producing peace has grown. Alongside a plethora of political actions, there is now a greater international awareness of how peace can be brokered and policed. As a result, peace processes now extend well beyond the actuality of ceasefires and an absence of war to cover legacy issues of victims, truth and reconciliation.

This book expertly examines the practical application of solutions to conflict. The first part analyses various political means of conflict management, including consociational power-sharing, partition, federalism and devolution. The second explores the extent to which these political formulas have been applied - or ignored - in a wide range of conflicts including Bosnia-Herzegovina, Northern Ireland, Israel-Palestine, Lebanon, the Basque Region and Sri Lanka.

Comparative Peace Processes combines optimism with a realist approach to conflict management, acknowledging that the propensity of dominant states to engage in political experimentation is conditioned by the state of conflict. It will be a valuable resource for anyone interested in general theories of political possibilities in peace processes and the practical deployment of political ideas in conflict zones.

The term peace process entails a variety of conflict management and conflict resolution tools. As evidenced by a plethora of international conflicts in the contemporary world, the techniques of peacemaking have evolved as the nature of conflict has changed. The mere existence of a cease-fire among contending parties is no longer sufficient for establishing durable, functioning institutions to maintain peace. In this rigorously researched, theoretically sound book, Tonge (Univ. of Liverpool, UK), analyzes the evolution and transformation of peace processes and examines the limits of peace processes in a variety of international settings. He offers prescriptions for conflict management or resolution, explains what an inclusive peace process entails, and looks at how to implement and maintain peace. Tonge also examines the success, or failure, of peace processes by using a number of case studies from a wide range of contemporary conflicts. The Palestinian case represents how the peace process can be repeatedly deadlocked, and Lebanon's "confessionalism" and Northern Ireland's "consociational" peace arrangements are examples of successful peace processes. Tonge also examines how the peace process evolved in Bosnia and Herzegovina, how peace triumphed in the Basque Country with the insurgency's slow defeat, and how the insurgency disintegrated in Sri Lanka. Summing Up: Highly recommended. Upper-division undergraduate, graduate, and research collections. --Nader Entessar, University of South Alabama

Jon Tonge is Professor of Politics at Liverpool University and the co-editor of the Journal Parliamentary Affairs.