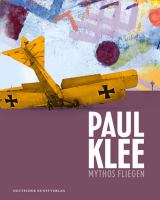 Presenting eminent works on loan from international collections, this catalog traces Paul Klee's artistic development between 1916 and 1919. On March 5, 1916, exactly one day after the death of Franz Marc, Paul Klee was conscripted for military service, first in Landshut and then in Schleißheim. On January 16, 1917, finally, he was redeployed to the Royal Bavarian Flying School V in Gersthofen near Augsburg. Despite highly unfavorable conditions, he entered a prolific artistic period there that lasted until end of the war. Aside from the theme of "flying," landscapes play an important role in Klee's art from this period, and the use of forms he developed provided the basis for the works he created during his time at the Bauhaus and the Academy of Art in Düsseldorf. The book includes contributions by Georg Dietmair, Lorenz Dittmann, Thomas Elsen, Uta Gerlach-Laxner, Tilo Grabach, Uwe Heckmann, Richard Ide, Annegret Jürgens-Kirchhoff, Eberhard Pfeuffer, Julia Quandt, Shahab Sangestan, Christof Trepesch, Eva Wiederkehr, and Thomas Wiercinski.

Christof Trepesch is the director of the Kunstsammlungen und Museen Augsburg.