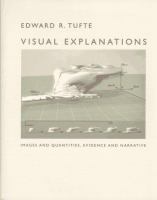 Tufte's (statistical evidence and information design, Yale U.) third book on displaying information that began with the now classic (1983). Whereas the first considered the display of numbers and the second of nouns, this explores the representation of verbs, mechanisms and motion, process and dynamics, cause and effect, explanation and narrative. In explicating the principles, he cites such examples as visual evidence to decide to launch the space shuttle Challenger, a supercomputer animation of a thunderstorm, stage magic, and disinformation design. Many examples show redesigns comparing before and after. Lavishly illustrated in color throughout, and includes four flaps showing before and after effects. Annotation c. by Book News, Inc., Portland, Or.

Tufte is the master of visualization. You can immediately add this new work alongside his previous gems, Visual Display of Quantitative Information (1983) and Envisioning Information (1990, both from Graphics). Tufte's discussions take place in a world where specific software and certain parameters of the web don't existwe all know such limitations are always changing anyway. His historical perspective allows Tufte to demonstrate simple, timeless guidelines that are independent of special stylesheets or the latest upgrade from Netscape. In this volume, Tufte illustrates not only traditional areas such as statistics, repetitions, and multiples but also magic and compositional allegories. (c) Copyright 2010. Library Journals LLC, a wholly owned subsidiary of Media Source, Inc. No redistribution permitted.

This is a second sequel to Tufte's well received Visual Display of Quantitative Information (CH, Nov'83); Envisioning Information (CH, Nov'90) was the second in the series. That volume, like the present, is notable for both its sensible illustrations of principles of clarity of presentation and for its attractive construction by Graphics Press. Bibliophiles will enjoy the design, and those involved with informative illustration (e.g., graphic artists, scientists, publishers, and Web page designers) will be well served by the advice and illustrations of the various do's and don'ts. Each small case study has its own distinctive fascination, presenting historical and contemporary examples of effective or ineffective presentation, specifically here dealing with the static presentation of dynamic situations (statistical trends, engineering failures, magic tricks, virtual museum tours, etc.). Although the "principles" are a bit bland, the paradigms are striking and, incidentally, very eye-catching to the browser. Recommended for all libraries that include works on design, engineering, computer graphics, and the history of science and technology. All levels. P. D. Skiff; Bard College