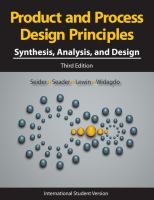 Armed with this book, chemical engineers will have a collection of modern strategies for the design of chemical products and processes. It emphasizes a systematic approach and integrates product design more thoroughly throughout the chapters. New case studies on process design are included to make the concepts more relevant. The social aspects and economics of product design are introduced, and the Stage-Gate Product Development Process is explored in parallel tracks for several chemical products. The accompanying registration card grants access to a companion website that also provides chemical engineers with numerous examples of the simulator input and output, with frame-by-frame instructions to discuss the nature of the models provided for the processing units.

Wareen D. Seider is Professor of Chemical Engineering at the University of Pennsylvania. He received a B.S. degree from the Polytechnic Institute of Brooklyn and M.S. and Ph.D. degrees from the University of Michigan. Seider has contributed to the fields of process analysis, simulation, design, and control. He co-authored FLOWTRAN. Simulation: An Introduction in 1974 and has coauthored the design course at Penn for over 20 years involving projects provided by many practicing engineers in the Philadelphia area. He has authored or coauthored over 80 journal articles and authored or edited six books.

Daniel R. Lewin is Professor of Chemical Engineering and the director of the Process Systems Engineering (PSE) research group at the Technion, the Israel Institute of Technology. He received his B.Sc. from the University of Edinburgh and his D.Sc. from the Technion. His research focuses on the interaction of Process design and process control and operations, with emphasis on model-based methods. He has authored and coauthored over 90 Technical publications in the area of process systems engineering, as well as the first edition of this textbook, and the multimedia CD that accompanies it.