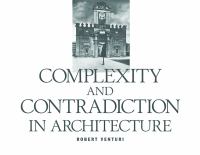 Complexity and contradiction in architecture / Robert Venturi; with an introduction by Vincent Scully

First published in 1966, and since translated into 16 languages, this remarkable book has become an essential document of architectural literature. A "gentle manifesto for a nonstraightforward architecture," Venturi's Complexity and Contradiction in Architecture expresses in the most compelling and original terms the postmodern rebellion against the purism of modernism. Three hundred and fifty architectural photographs serve as historical comparisons and illuminate the author's ideas on creating and experiencing architecture. Complexity and Contradiction in Architecture was the winner of the Classic Book Award at the AIA's Seventh Annual International Architecture Book Awards.

Robert Charles Venturi Jr. was born in Philadelphia, Pennsylvania on June 25, 1925. He received undergraduate and graduate degrees from Princeton University. He worked for Eero Saarinen and Louis Kahn, before winning a fellowship at the American Academy in Rome. Venturi spent two years in Europe studying buildings. After returning to the United States, he joined the faculty at the University of Pennsylvania.

He went into private practice in 1960, first in partnership with William H. Short and then, starting in 1964, with John Rauch. His wife Denise Scott Brown joined the Venturi Rauch firm in 1969. In 1989, Rauch resigned, the firm was renamed Venturi, Scott Brown & Associates. It is now known as VSBA Architects & Planners. His buildings and books helped inspire the movement known as postmodernism. His buildings included the Guild House in Philadelphia, an addition to the National Gallery in London, and the Seattle Art Museum. His books included Complexity and Contradiction in Architecture and Learning from Las Vegas written with Denise Scott Brown and Steven Izenour. He won the Pritzker Prize in 1991. He died from complications of Alzheimer's disease on September 18, 2018 at the age of 93.