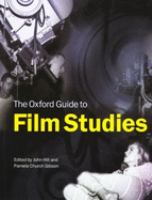 Comprehensive, authoritative, and unique, The Oxford Guide to Film Studies is the up-to-date critical volume on the theories, debates, and approaches to the study of film. A host of international experts provide an overview of the main disciplinary approaches to film studies, an explanation ofthe main concepts and methods involved in film analysis, a survey of the main issues and debates in the study of film, and critical discussion of key areas.The Guide features:* Comprehensive coverage suitable for any course on cinema or film studies* Organized into three sections: Approaches; Hollywood and the World; World Cinema* An emphasis throughout on critical concepts, methods, and debates* Specially commissioned chapters on such varied topics as film music, the Hollywood Star System, and the idea of national cinema* Coverage dedicated to important new areas in film studies: gay and lesbian criticism, postcolonial theory, audience studies, post-classical Hollywood cinema, and cultural studies* Chapters discussing exciting new developments in classical topics, such as Early Hollywood Cinema, Film History, and the avant-garde* Illustrated throughout, and complete with `readings' designed to demonstrate the variety of theoretical approaches, chapter headings and summaries, guides to further reading, and `highlight' quotesWith its uniquely comprehensive coverage, The Oxford Guide to Film Studies is an indispensable aide and reference source for the student of film and media, and anyone interested in the study of cinema.

Hill and Gibson do an excellent job of representing the fashionable film theories of the last decade. Containing essays in three categories ("Critical Approaches," "American Cinema and Hollywood," and "World Cinema") by more than 70 film scholars, the volume addresses predictable contemporary theoretical approaches (semiotics, Marxism, feminism, cultural studies) and a few unexpected issues (film costume, film music, pornography). Despite its length, the book appears richer than it is. The essays are redundant--the same names and theories keep cropping up, and from the same perspectives (for example, essay after essay discusses Andre Bazin, always in conjunction with his one-note theory of film realism). On the evidence of this guide, the most significant film theorists are Laura Mulvey, Janet Staiger, Kristin Thompson, and David Bordwell; the most significant filmmakers, John Ford and Alfred Hitchcock. Unfashionable thinkers (e.g., Gilberto Perez) and "lesser" luminaries (e.g., Frank Capra) go unmentioned. Though a bibliography accompanies each essay, the entries overlap significantly. Most seriously, the guide--perhaps inadvertently--dismisses two concerns once central in film studies: interpretation and evaluation. Neither aesthetics nor "criticism" square with postmodern views, so neither merits consideration. Rigidly academic, almost exclusively contemporary, completely uncritical of its own theoretical stances, this unbalanced volume is recommended only for large undergraduate and graduate collections. R. D. Sears Berea College