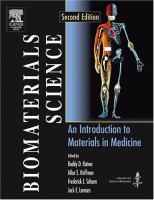 The second edition of this bestselling title provides the most up-to-date comprehensive review of all aspects of biomaterials science by providing a balanced, insightful approach to learning biomaterials. This reference integrates a historical perspective of materials engineering principles with biological interactions of biomaterials. Also provided within are regulatory and ethical issues in addition to future directions of the field, and a state-of-the-art update of medical and biotechnological applications.

All aspects of biomaterials science are thoroughly addressed, from tissue engineering to cochlear prostheses and drug delivery systems. Over 80 contributors from academia, government and industry detail the principles of cell biology, immunology, and pathology. Focus within pertains to the clinical uses of biomaterials as components in implants, devices, and artificial organs. This reference also touches upon their uses in biotechnology as well as the characterization of the physical, chemical, biochemical and surface properties of these materials.

Buddy D. Ratner, Michael L. and Myrna Darland Endowed Chair in Bioengineering and Professor of Chemical Engineering at the University of Washington, received his Ph.D. (1972) in polymer chemistry from the Polytechnic Institute of Brooklyn. From 1985-1996 he directed the NIH-funded National ESCA and Surface Analysis Center for Biomedical Problems (NESAC/BIO), and in 1996 he assumed the directorship of University of Washington Engineered Biomaterials (UWEB), an NSF Engineering Research Center. He is the editor of the Journal of Undergraduate Research in Bioengineering, a past president of the Society for Biomaterials and author of 400 scholarly works. Ratner is a fellow of the American Institute of Medical and Biological Engineering (AIMBE), the American Vacuum Society and a Fellow, Biomaterials Science and Engineering (FBSE). He served as president of AIMBE, 2002-2003. He is vice president of the Tissue Engineering Society International (TESI) 2003-2005. In 2002 Ratner was elected a member of the National Academy of Engineering, USA, and in 2004 he won the Founder''s Award for the Society For Biomaterials. His research interests include biomaterials, tissue engineering, polymers, biocompatibility, surface analysis of organic materials, self-assembly, nanobiotechnology and RF-plasma thin film deposition. Summary of Buddy Ratner''s awards and honors : 1989 Clemson Award for Contributions to the Biomaterials Literature 1990 Burlington Resources Foundation Faculty Achievement Award for Outstanding Research 1991 Perkin-Elmer Physical Electronics Award for Excellence in Surface Science 1991-1992 President, Society For Biomaterials 1993 Founding Fellow, American Institute of Medical and Biological Engineering (AIMBE) 1993 Fellow, American Vacuum Society; Vice President, AIMBE 1993 Fellow, Society For Biomaterials; Van Ness Lecturer, Rensselaer Polytechnic Institute 1998 C.M.A. Stine Award in Materials Science (AIChE); American Vacuu

Professor Hoffman studied at M.I.T., where he received B.S., M.S., and Sc.D. degrees in Chemical Engineering between 1953 and 1957. He taught on the faculty of M.I.T. Chemical Engineering Department for a total of ten years. He also spent four years in industry. Since 1970 he has been Professor of Bioengineering at the University of Washington in Seattle, Washington. Professor Hoffman has over 330 publications, several books and chapters, 21 patents and several other patents pending. He is on the Editorial Boards of seven scientific journals. Summary of professional activities and awards include: .President, Society for Biomaterials, 1983-1984 .Clemson Award in Biomaterials, 1984 .Board of Governors, Controlled Release Society, 1991-1994 .Biomaterials Science Prize, Japanese Biomaterials Society, 1990 .Founders'' Award of the Society for Biomaterials, 2000 .Election to the National Academy of Engineering, 2005 In December, 1992, Hoffman''s colleagues organized a symposium in Maui, Hawaii in honor of his 60th birthday. In December, 2002 his 70th birthday was celebrated at another special symposium, once again in Maui, Hawaii. Papers from the first symposium were published in the Journal of Biomaterials Science (Polymer Edition), along with a Festschrift book, and similar publications are in press at this time from the second symposium.

Frederick J. Schoen is Professor of Pathology and Health Sciences and Technology, Harvard Medical School; Director of Cardiac Pathology and Executive Vice-Chairman in the Department of Pathology at the Brigham and Women''s Hospital (BWH) in Boston. Schoen received a B.S.E. (Materials and Metallurgical Engineering) from the University of Michigan (1966), a Ph.D. in Materials Science from Cornell University (1970) and an M.D. from the University of Miami School of Medicine (1974). Following a Surgery internship followed by residency in Anatomic Pathology and fellowship in Thoracic and Cardiovascular Pathology at the University of Florida, he joined BWH in 1980. Schoen has focused his research career on tissue-biomaterial interactions, structure-function-pathology correlations in the native heart valves, heart valve substitutes and other cardiovascular prostheses, calcification of bioprosthetic tissues, heart transplantation, and cardiovascular applications of tissue engineering. Schoen has leadership responsibilities in academic programs in the Department of Pathology, Harvard Medical School and the Harvard-MIT Division of Health Sciences and Technology (HST); he currently chairs the HST Faculty Appointments Committee and the Graduate (Curriculum) Committee, and is an active teacher of courses in pathology, cardiovascular pathology, and biomaterials and tissue engineering. He chairs the BWH Education Committee. Schoen is author or co-author of approximately 375 manuscripts in journals and books. He authored Interventional and Surgical Cardiovascular Pathology: Clinical Correlations and Basic Principles (1989); and was Co-Editor of Biomaterials Science: An Introduction to Materials in Medicine (1st Edition 1996, 2nd Edition 2004), and Silver''s Cardiovascular Pathology, 3rd Edition (2001). He is Past-President of the Society For Biomaterials (SFB) and the Society for Cardiovascular Pathology, and was Founding Fellow of the American In