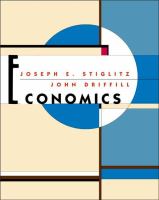 Based on Joseph Stiglitz's ground-breaking Economics - which set new standards in the teaching of the subject to undergraduates - adapted by John Driffill of Birkbeck College, this textbook will be suitable for introductory courses in Britain, the Republic of Ireland and South Africa as well as many European countries.

Joseph Stiglitz is professor of economics at Columbia University.

Influential economist and Columbia University professor Joseph Eugene Stiglitz was born in Gary, Indiana on February 9, 1943. He received his undergraduate degree from Amherst College and his Ph.D. from MIT in 1967. He was awarded the John Bates Clark Medal in 1979 and the Nobel Memorial Prize in Economic Sciences in 2001.

Stiglitz has taught at Yale University, Stanford University, Duke University, Oxford University, and Princeton University. In 2000, he founded the Initiative for Policy Dialogue. Stiglitz worked for the Clinton Administration beginning in 1993 and was the Chairman of the Council of Economic Advisers from 1995 to 1997. For the next three years he served as the World Bank's Senior Vice President and Chief Economist. Stiglitz chaired the Commission of Experts on Reforms of the International Monetary and Financial System in 2009.

He has written several hundred articles and many books, including Making Globalization Work and Freefall: America, Free Markets, and the Sinking of the World Economy. His title The Price of Inequality made The New York Times Best Seller List for 2012.