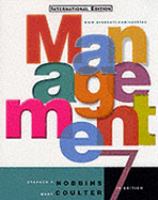 For courses in Principles of Management or Introduction to Management. Robbins and Coulter's best-selling text demonstrates the real-world applications of management concepts and makes management come alive by bringing real managers and students together. As it successfully integrates the various functions of management, the book establishes a dialogue with managers from a variety of fields. Students and professors alike will enjoy the chapter-opening A Managers Dilemma vignettes (which Introduce students to real situations-related to chapter concepts-faced by real managers) and the chapter-ending Real Managers Respond to Opening Dilemma discussions that enable students to explore successful resolutions using concepts they learned in each chapter.

Stephen P. Robbins received his Ph.D. from the University of Arizona. He previously worked for the Shell Oil Company and Reynolds Metals Company. Since completing his graduate studies, Dr. Robbins has taught at the University of Nebraska at Omaha, Concordia University in Montreal, the University of Baltimore, Southern Illinois University at Edwardsville, and San Diego State University. Dr. Robbins' research interests have focused on conflict, power, and politics in organizations, as well as the development of effective interpersonal skills. His articles on these and other topics have appeared in such journals as Business Horizons, the California Management Review, Business and Economic Perspectives, International Management, Management Review, Canadian Personnel and Industrial Relations, and the Journal of Management Education.

In Dr. Bobbins' "other life," he participates in masters' track competition. Since turning 50 in 1993, he has set numerous indoor and outdoor world sprint records. He's also won gold medals in World Veteran Games in 100m, 200m, and 400m. In 1995, Bobbins was named the year's outstanding age-40-and-over male track and field athlete by the Masters Track and Field Committee of USA Track & Field, the national governing body for athletes in the United States.

Mary Coulter received her Ph.D. in Management from the University of Arkansas in Fayetteville. Before completing her graduate work, she held different jobs including high school teacher, legal assistant, and government program planner. She has taught at Drury University, the University of Arkansas, Trinity University, and since 1983, at Southwest Missouri State University. Dr. Coulter's research interests have focused on competitive strategies for not-for-profit arts organizations and the use of new media in the educational process. Her research on these and other topics has appeared in such journals as Journal of Business Strategies, Journal of Business Research, Journal of Nonprofit and Public Sector Marketing, International Journal of Business Disciplines, and Case Research Journal. In addition to Management, Dr. Coulter has published two other books with Prentice Hall, Strategic Management in Action, Second Edition, and Entrepreneurship in Action. When she's not busy teaching or writing, she enjoys puttering around in her flower gardens, playing the piano, reading all different types of books, and enjoying many different activities with husband Ron and daughters Sarah and Katie.