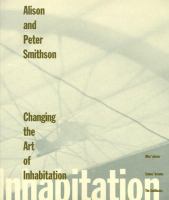 These stimulating profiles document three architects' lines of influence and their effects on the way the spaces we inhabit are ordered and furnished.

The British architect Alison Smithson has produced one of the most significant and influential bodies of work of the second half of the 20th century. Her books include Urban Structuring, Ordinariness and Light, Without Rhetoric, The Shift, and the influential Team X Primer. Alison Smithson died in 1993.