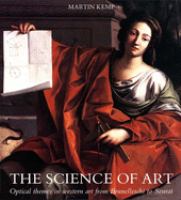 The science of art : optical themes in western art from Brunelleschi to Seurat / Martin Kemp

In this pathbreaking and richly illustrated book, Martin Kemp examines the major optically oriented examples of artistic theory and practice from Brunelleschi's invention of perspective and its exploitation by Leonardo and Durer to the beginnings of photography. In a discussion of color theory, Kemp traces two main traditions of color science: the Aristotelian tradition of primary colors and Newton's prismatic theory that influenced Runge, Turner, and Seurat. His monumental book not only adds to our understanding of a large group of individual works of art but also provides valuable information for all those interested in the interaction between science and art. "This beautifully made volume . . . shows us the unity of the visual study of nature-the exalted mutual task of Renaissance science and art."- Scientific American

"[A] wonderful book. . . . Martin Kemp has convincingly demonstrated that even the most diverse styles of Western art from the Renaissance to modern times remained ever enthralled by scientific optics. . . . [A] handsome volume."-Samuel Y. Edgerton, American Scientist "An extraordinarily ambitious, even daring, enterprise. . . . The book leaves us in no doubt about its author's expertise in both fields. It includes the most comprehensive account of the development of perspective theory and practice I know."-Thomas Puttfarken, Times Higher Education Supplement

"Kemp has performed a valuable service. . . . His style is lucid and he emerges as an honest broker who judiciously weighs the historical evidence. He has an impressive command of the literature of both art and optical science across much of Europe and over a span of four centuries. . . . Kemp's thesis is amply illustrated with several hundred plates, including many of his own line drawings. . . . The reader is led gently through the history of art and the details of optical science to appreciate their interrelationship."-Geoffrey Cantor, Oxford Art Journal

This work, one of the most lucidly written art history books in recent memory, addresses a topic of inherent complexity and great recent interest. Kemp (Univ. of St. Andrews), who has written on Leonardo, discusses perspective and optic theories as they related to the central problem of European painting for half a millennium, the verisimilar depiction of nature. The first part of the book discusses perspective theory and practice and the use of devices that led toward photography. In the second part, Kemp explores optic theories derived from Aristotle and from Newton and their theoretical and practical impacts on painting. The only minor cavil is the unclear order of the select bibliography; otherwise, this is a superb and thoughtful book, with a level of writing to which few can aspire. Highly recommended for general as well as special collections.-- Jack Perry Brown, Ryerson & Burnham Libs . , Art Inst. of Chicago (c) Copyright 2010. Library Journals LLC, a wholly owned subsidiary of Media Source, Inc. No redistribution permitted.

In a volume filled with some 570 illustrations, Kemp discusses European painters' imitation of nature through the sciences of perspective and color. (Apr.) (c) Copyright PWxyz, LLC. All rights reserved

Kemp, a Leonardo Da Vinci specialist, here provides a detailed history of how the sciences of perspective and of color influenced the practices and works of artists from 1400 to 1880. (Perspective is given roughly twice as many pages as color.) Developing theories of optical and geometrical space increasingly influenced perspective technique during the first half of this period. In the second half questions of how we perceive nature and growing distinctions between the arts and the sciences directed attention away from issues of perspective. The theory of physical colors, in the early centuries based on ideas attributed to Aristotle and later on the work of Newton, Young, and Maxwell, while not enabling artists to imitate nature accurately with pigments, did influence their use of color. Fully documented by 553 illustrations and diagrams, 16 color plates, and 1,278 footnote references, this is a rich and subtle history of the complex relations between artists' practices and their theoretical knowledge. The tone is temperate, the judgments are balanced, and the arguments are stated so completely that the reader needs no previous knowledge of perspective or color theory. All libraries. -A. B. Stewart, Wright State University

Martin Kemp is professor of the history of art at Oxford University.