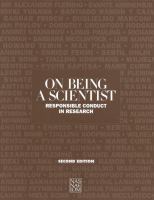 On being a scientist : responsible conduct in research / Committee on Science, Engineering, and Public Policy

Since the first edition of On Being a Scientist was published in 1988, more than 200,000 copies have been distributed to graduate and undergraduate science students. Now this well-received booklet has been updated to incorporate the important developments in science ethics of the past 6 years and includes updated examples and material from the landmark volume Responsible Science (National Academy Press, 1992). The revision reflects feedback from readers of the original version. In response to graduate students' requests, it offers several case studies in science ethics that pose provocative and realistic scenarios of ethical dilemmas and issues. On Being a Scientist presents penetrating discussions of the social and historical context of science, the allocation of credit for discovery, the scientist's role in society, the issues revolving around publication, and many other aspects of scientific work. The booklet explores the inevitable conflicts that arise when the black and white areas of science meet the gray areas of human values and biases. students entering scientific research, their instructors and mentors, and anyone interested in the role of scientific discovery in society.