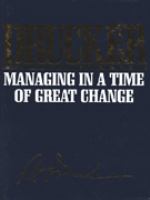 Managing in a time of great change / Peter F. Drucker

A collection of Peter Drucker's essays and interviews on the subject of the management of change.

The worldview of management guru Drucker is carefully thought out and simply composed, which makes his works easy to digest. Similar to his Managing for the Future (LJ 1/92), this book is a collection of essays and articles previously published in well-known periodicals since 1991. Drucker selected pieces that received positive responses and made them into chapters arranged by four topics: management, information-based organization, the economy, and society. In some instances, a few essays were lengthened, and the epilog was written strictly for the book. Executives and longtime Drucker aficionados will particularly enjoy having these well-regarded essays in one package. Highly recommended for all business collections. [Previewed in Prepub Alert, LJ 7/95.]-Rebecca A. Smith, Harvard Business Sch. Lib. (c) Copyright 2010. Library Journals LLC, a wholly owned subsidiary of Media Source, Inc. No redistribution permitted.

Bestselling management guru Drucker's latest offering is a grab bag of articles published since 1991, though he states that every piece was written with this book in mind. Extending the insights of his Post-Capitalist Society (1993), he stresses that information has emerged as the executive's key resource and a company's bedrock; as a consequence, he recommends that teams replace traditional boss-subordinate relationships. With his trademark cogency and clarity, Drucker offers invaluable practical insights for managers at all levels. One piece enumerates the ``five deadly business sins''; another argues that every company operates according to its own theory of businessa set of assumptions about its environment, mission and core competenciesthat needs to be made explicit and monitored. Drucker probes the impact of the information revolution on retailing, sets forth guidelines for family-controlled businesses and urges policy changes to assist nonprofit organizations. He calls upon the federal government to institute periodic performance critiques of every federal agency and program. He is at his provocative best in arguing that we can revive our national economy only by forging an aggressive global economic policy that jettisons protectionism and gives international trade priority over domestic problems. (Nov.) (c) Copyright PWxyz, LLC. All rights reserved

In Managing in a Time of Great Change Drucker not only enhances his reputation as the foremost management thinker of the century, but continues to provide meaningful insights into social and political issues. Among the specific topics he examines are the impact of the Information Age on society, the implications for business of the reinvention of government, the shifting balance of power between management and labor, and the various types of teamwork that an organization can choose to adopt. Although Drucker's reputation is firmly grounded in management, in this book his most salient contribution addresses societal issues. Specifically, the chapter titled "A Century of Social Transformation" provides a concise social history of the century while describing the emergence of the knowledge society and its impact on existing institutions. The readership of this book should not be limited to management academics and practitioners; rather the insights Drucker offers will attract a broad audience. This volume belongs in all libraries--public, academic, and professional. E. Garaventa; College of Staten Island, CUNY

Drucker is the foremost management thinker of our time and also a keen social observer and prolific writer. His Post-Capitalist Society (1993) deftly analyzes a future in which the workplace will be dominated by the "knowledge worker," a phrase Drucker coined 35 years ago. This most recent book is a collection of Drucker's writing that has appeared since 1991 in such periodicals as the Atlantic Monthly, Foreign Affairs, and Harvard Business Review all, says Drucker, with the intent of eventually being anthologized. Each article is noteworthy. "A Century of Social Transformation," "Really Reinventing Government," and "The End of Japan, Inc." are typically seminal, filled with Drucker's insights. In contrast to his forward-looking, startlingly accurate New Realities (1989), this book's 25 pieces and two interviews deal with "changes that have already irreversibly happened." Drucker offers them up as a challenge to executives who he hopes will take action to help "make the future." --David Rouse

Like the Energizer Bunny, Drucker just keeps on going, and going . . . beating the drum for perceptive, responsible management in the public as well as private sectors. As with many of the maestro's previous works (Post-Capitalist Society, 1993, etc.), most of the essays and interviews here have already been published (in Atlantic Monthly, Foreign Affairs, and elsewhere). Using as a departure point the apprehension that knowledge has become the Global Village's primary resource, Drucker comments on the realities of planning ahead, the sort of intelligence executives require to operate effectively, the consequences of shortchanging research budgets, the likelihood that for-profit enterprises could be obliged to pursue growth through alliances rather than through acquisition, and related topics. To a great extent, Drucker points out, the shape of things to come may be discerned from demographic and allied data that's readily available. In this context, he assesses where sizable new markets might emerge. Geographically, the author sees a wealth of potential in coastal China and other Pacific Basin outposts; commercially, he anticipates substantive opportunities in agrobiology, alternative energy sources, infrastructure projects (including telecommunications networks), pollution abatement, and retirement programs. Drucker goes on to caution that any state's domestic policies can profoundly affect the competitiveness of corporations subject to its jurisdiction. Accordingly, he argues, something more than lip service must be paid to the goal of reinventing government, in large part because the root cause of poverty for countries as well as individuals in tomorrow's world will be ignorance. Nor does Drucker overlook the importance of a so-called third sector, i.e., the nonprofit community-service organizations that address a modern nation's social challenges. In brief: wise, wide-ranging guidance on issues that promise to engage the attention of leaders and followers through the end of the century and beyond.

Peter F. Drucker has been Clarke Professor of Social Science and Management at Claremont Graduate School in California since 1971.